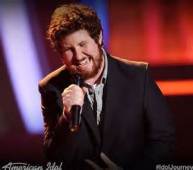 Yarrrrr, mee matey walked the plank….. The Mudville six are now the (Randy)Jackson Five….. Idol lost its harmony singer, its stand-up bass player and it’s most unpredictable contestant; Casey Abrams’ wild and crazy Idol ride ended tonight with one more triumphant and wildly insane performance, as he tried to kiss every girl in the room and even kissed Steven Tyler. The man has imagination, and the cat can strut. We’ll miss you, my man. Now go find the meanest vocal coach that you can and learn how to harness your manic energy and polish that boatload of talent that you carry around, ok? We’ll see you at the finale (we’ll see what the hell you pull off THERE….) and on the tour.

Crystalperformed her new single live as well. I liked the energy but the vocal arrangement? Not so much.Crystalsounded like, well,Crystal, but there were way too many low notes in there. Somebody get this girl a better producer, willya? Jimmy? Babyface?

Bruno Mars did a pre-taped performance and it was fine, very commercial, but I had a hard time concentrating on it. I couldn’t take my eyes off the dog. Was it a real dog? It sure looked real. The weirdest thing about it was that, from one camera angle it was looking towards the crowd, but from another it had its head up and on the arm of the couch, looking sideways. I never could catch it moving, so it was either a very good fake dog or they shot it full of thorazine or something.

One more thing, about the final moment before Casey got the news: Scotty was genuinely nervous about getting tossed, but nowhere near as nervous as the judging table. Casey was smiling and looking up, waiting for the news and knowing that it was his name on Ryan’s cue card. It was, of course, and Randy Jackson let out a huge sigh of relief and fell back in his chair. As I said at the top, Casey was just fine with the news, no tears, and he went out with the same bang that he came in with, several months ago. The last moment before the show went black was really weird, as Casey held Haley and sang “You’re mine” right into her face. Haley pushed him away playfully and said “get out”, or something like that.

Oh, and one more thing that I forgot. Jimmy harped on Haley for not knowing who she is, and Haley let out something that got the sound cut off for a good 2 seconds. A little bad blood there, maybe? Haley sounded really frustrated when she tried to explain herself. She is the most competitive contestant on the show, and while she is tiny she is fierce.

5: Jacob- Don’t assume that he’ll be gone. His voting bloc is active

4: Haley- At odds with Jimmy, could be a real problem

3: Lauren- Not safe anymore by any means

1: Scotty- Bottom 2 my butt. That was all about trying to create some drama